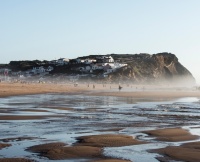 Most people are of the impression that retirees are all looking to downsize in their later years, but there are actually all kinds of reasons why they may want to move to a larger or more expensive home. The good news for people in that group is that it can be done if they have sizeable home equity, and then combine that with a reverse mortgage. Many retirees have long since paid off their house loan, and can use the aforementioned technique to move into a pricier than the one they are currently in, and all without being saddled with a hefty mortgage. In many cases, the retirees will actually come out of the deal with some of the equity from their old home still in their pocket.

Here is how the math actually shakes out, keeping in mind that the numbers quoted will be different in every single case. The numbers here are just used as an example to show how this process works. Let’s imagine for a moment that the couple in question live in a $300,000 home in Burnside in the Sunshine Coast. They want to move closer to family in Palmoods or Woombye, but want a house that is $450,000. They have to sell their property, and then put down 85% maximum (at age 60) down to 55% minimum (at age 90) on the new place. The remaining amount would be covered by a reverse mortgage, and they would still have cash in their pocket after all the closing fees have been taken care of.

The beauty of the reverse mortgage is that it does not need to be repaid until the home is sold it the couple move or pass away. This is assuming that all of their financial obligations have been met. The downside is that the closing costs and interest rates of a reverse mortgage are pricier than a standard one, which is something that needs to be considered. The money invested in the home will be used to pay off the balance of the reverse mortgage, with the remainder available for legacy once all other costs have been paid.

It’s certainly not everyone who will be interested in this type of deal, although it has to be said that there are other benefits of a reverse mortgage other than the one discussed earlier. It can be used to get a reverse mortgage line of credit, as a way to generate income similar to an annuity, or even as a way to unburden themselves from the principal and interest payments of a conventional mortgage. It should be noted with the latter that the couple would still be responsible for property taxes, insurance, tax depreciation, and any other costs outside of the mortgage.

There are a lot of retirees out there who have as much, or sometimes even more, equity in their home than they do in their retirement savings. Switching to a reverse mortgage can put that equity back into your pocket instead of just having it sitting there not being used.